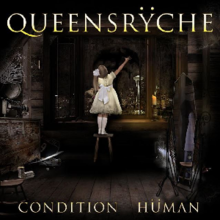 With their previous album, the self-titled one, American Progressive Metal band Queensrÿche had the eyes of the world on them due to the much publicized split with Geoff Tate and the existence of two competing Queensrÿches. There was the intrigue of a new singer, and the “they’ve gone back to their Metal roots” tagline to get everyone’s attention. Luckily, It was a brilliant album, but people would’ve been paying attention anyway. In 2015, with all the dust settled, and no more special taglines, the band have to sink or swim solely on the merits of the music.

Like their previous self-titled effort, Condition Hüman was crowdfunded, and if like me you pledged I’m sure you’ll already be very familiar with the first three tracks which the band let you download while you waited for the full album to be released. As it turns out, these three tracks are actually a pretty fair cross-section of the album proper and display the different moods explored on the record quite adequately. Opening with ‘Arrow Of Time’ which is now firmly in the band’s live setlists, the band show off their Heavy Metal roots, going for a “remember, we wrote ‘Queen Of The Ryche’ and ‘The Needle Lies’ too you know!” sort of feel. Promotional single ‘Guardian’ is next which I would say is the average sound of the album overall, so go out and listen to the song and watch the video because I think it is a pretty clear indication of what you can expect from the band nowadays. Then comes the slower, darker, less conventional ‘Hellfire’ which explores the progressive side of the band – never going so far as to have a 7-minute keyboard solo or songs about flowers developing split personalities in space, but certainly finds the Seattle group putting more thought into structuring, dynamics and unusual ideas than your average bread and butter Heavy Metal bands would. It wouldn’t feel too out of place on Promised Land beside ‘Damaged’ or even Hear In The Now Frontier beside ‘Hit The Black’ at a push but there’s a more modern feel too it… making it feel more like a logical successor to the type of music the band were writing on Operation Mindcrime II (an underrated album in my opinion).

The band do explore more of their overall discography on this one, which feels fair to me. It was unquestionably good to go back to the EP-Empire days, but it would also be a shame to outright ignore the best parts of what came afterwards and keep an artificial boundary in place forever. This album seems to be a reconciling of the previous Todd-fronted album with the post-Empire material to excellent effect; ‘Selfish Lies’ for example sounds at first like a bit the Tribe album, then goes a bit Empire-esque towards the end once the delicious album-highlight guitar solo comes in. ‘Eye9’ opens with a nice Tool-esque bassline and heavily processed vocals that reminds me of a mixture between ‘I Am I’ and ‘The Hostage’ from previous releases, but the song takes so many twists and turns in its duration it crosses all sorts of territory from American Soldier to Rage For Order, and when the (also album highlight) guitar solo came on for the first time it made my already high estimation of the song double or even triple (the lead guitar on this album is simply joyous!). Most surprising of all, ‘Just Us’ is an acoustic-flavoured, jangly Alternative Rock song that wouldn’t be out of place on either Hear In The Now Frontier or Q2K and even though the thought of that is off-putting to a lot of the fanbase, well, the rejuvenated band show us how good it can be, (and hey, when you’ve not got a full album of it, it works as a nice contrast) injecting an almost Houses Of The Holy feel into the proceedings and elevating it to something special.

The album lasts twelve tracks long, (with one of those just being an intro for the final song), and clocks in at 54 minutes, which is a lot more substantial than the trim and cheerful album which the Todd-lineup debuted with. Not only is it in the addition of more tracks that this extra length manifests itself, but the individual tracks themselves are all a little longer…the previous record’s tracks all lasted between two-and-a-half to four minutes in length and this album sees that average shift to something like between four and five, with the final track lasting almost eight. What you get for your extra invested time isn’t simple repetition or wasted time or filler… you get extra guitar solos, more thoughtful and sophisticated song writing and the ability to work in slower tempos alongside the fist-pumping Metal. You could make an argument that it isn’t as lean and focused, but you could also make the argument that there’s more depth.

Yes… my two favourite songs are predictably ‘Arrow Of Time’ and ‘All There Was,’ (which just happen to be the two most traditional songs on the record and the closest that the album comes to Speed Metal because I’m dreadfully predictable) but the band’s experimentation here is a profound success… with the record’s most progressive moment, the album-closing Title Track being not only one of the best songs on the album but one of the best songs the band have written in years and years, ending on an almost Voivod note and showing the guys still aren’t afraid to try new things.

All the background history and discography comparisons certainly get you to adjust your expectations, to guess what type of music might be here and get you interested in talking about it… but its all for nothing unfortunately, if the actual music is cack. Well, to put your mind at ease, it isn’t cack. Not by a long shot… stick on ‘Hourglass’ and just drink in those vocals, stick on one of the aforementioned guitar solos and bathe in the whip’s distinctive playing, pay close attention to the drum fills and hi-hat teasing from the unique and enjoyable Scott Rockenfield (in my opinion, one of the most important things in separating Queensrÿche from their peers). Yes, the musicianship is out of this world, with the same renewed passion and energy as the last album but more time to show off in! On top of that, the production job is better, with a more satisfying, less harsh sound and a clearer more balanced mix.

Overall; Condition Hüman was a surprise to me, but a really welcome one. I love the Todd line-up and I’ve loved their previous album so much that I still can’t stop listening to it ahead of numerous other classic releases, so when this record abandoned the formula slightly it could’ve been a bad move for this particular listener… but hey, the whole point of Queensrÿche was that they evolve between every album, never sounding the same twice. This album is not only another evolution, but a reaffirmation of everything that worked with every era of the band’s prestigious history, and its an album I’ll be listening to for a long time to come. Get yourself a copy without delay!