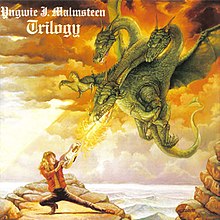 I think my usual long intro for these articles is too long so I’ve condensed it from here-on to this simpler version:

Forward 1: This is not a review, but a stream of consciousness written as I hear something for the first time. It’ll be subjective, personal opinions and un-researched speculation. The tone goes for fun rather than informative.

Forward 3: Everyone is a nerd about something. Maybe its Heavy Metal, maybe its football, maybe its beauty products and grooming tips but we all get our nerditidy from somewhere, whether or not society currently thinks its nerdy or not right now.

So; today I find myself listening to the third studio album by Yngwie J. Malmsteen, a nine-track record from 1986 entitled “Trilogy” with very Targarian looking album art and featuring in the line-up not only the titular Swede but also the very talented Jens Johansson who later went on to join Stratovarius to awesome results.

I have no idea what to expect… I have heard the name Yngwie Malmsteen bandied-about before (was he the guy who said “you have unleashed the fucking fury” on an airplane??) by people citing great guitar players, and I half-remember that he helped popularize the neoclassical guitar style in Heavy Metal (alongside of course Ritchie Blackmore and the late Randy Rhodes) but other than that I’m a blank slate.

Is it instrumental? Is it heavy? Is it Rock or Metal? …I have no idea. Let’s find out together…

“You Don’t Remember, I’ll Never Forget” energetically bursts the record open, with bright shiny ’80s keyboards and some chugging NWOBHM-esque guitar stabs. Seconds later and it sounds like I’m listening to Dio’s classic Holy Diver album. Hey…speaking of which, the vocals (ah, so there ARE vocals?) come in and what’s this? The guy sounds massively like Ronnie himself! Is that Ronnie?

Hmmm… a quick sly look on Wikipedia reveals its someone called Mark Boals…. My oh my, I feel like I did when I heard Eric Adam’s name for the first time.

Then Foghat’s ‘Coming On Down The Line’ plays because I forgot to unselect ‘shuffle’ in my iTunes. Its got a nice boogie, I have to admit, but its not strictly relevant so I’m going to have to stop listening to it and get back to the matter at hand.

Next comes ‘Liar’ which opens up with one of those great gallop parts like ‘Aces High’ by Iron Maiden or ‘The Needle Lies’ by Queensryche. When the vocals come in there’s a sort of feel like Rainbow’s ‘Stargazer’ (oh Hey… DIDN’T DIO SING ON THAT?) but with a nice NWOBHM-y chug underneath. This song is right up my alley. Then hey, when he says the word ‘Liar’ the song jumps a bit into a syrupy Power Metal mould for just a second and the whole mixture together is intoxicatingly perfect. I imagine this album was probably an influence to some of the early Power Metal pioneers for sure. Wow… its like listening to Tygers Of Pan Tang’s ‘Gangland’ along with ‘The Needle Lies’ and ‘Stargazer’ at the same time, and then at the break when all the neoclassical guitar heroics break in its like a big slice of Stratovarius pie as well! Then when the actual guitar solo follows it sounds so fresh and unique and unlike anybody else that I feel all nice and warm inside.

The next song comes on and its is pure shimmering 80s Dio. Are we sure iTunes didn’t shuffle again and actually stick on Sacred Heart? Nope? OK. This one is called ‘The Queen Is In Love’ and its amazing. I feel like I’ve heard it before. It sounds like it would’ve been on Grand Theft Auto Vice City.

Guitarwise, I think Yngwie is even further down the neoclassical spiral than Randy or Ritchie are. A lot further. Its cool that its on such a nice ’80s Metal record though. I thought it might’ve just been pagganini lines on an electric guitar but not actual songs and not heavy or catchy on the rhythm section. I like how they throw in double-kicks for the last verse of the song, I always like when a song will do that.

‘Crying’ comes next and really reminds me of Dream Theater ballads for some reason. Will it be a ballad? There’s some nice clean guitar. It’s a bit softer. The keys remind me of Hammerfall album closers, especially ‘Glory To The Brave.’

Two minutes in and still no vocals. Not a ballad per sae but rather a slightly softer instrumental. Not brushes-instead of drumsticks levels of soft though. It sounds like the music in a movie’s credits. Vague as that could be literally anything… but its what the song makes me visualize.

Then next he unleashes the fucking fury so to speak, in as much as the next song is called ‘Fury.’ It starts off with a nice ‘The Needle Lies’ sort of drumbeat… but the music sounds a bit more like Iron Maiden’s ‘Invaders’ than ‘Aces High’ if you need a Maiden reference point (because of course you do, right?). The keyboards dampen the heaviness a bit, and the vocals, though still Dio-esque are a little less biting so it feels like a laid back kind of heaviness. Then the guitars and keyboards dual in the way great Power Metal often does and it is delicious. I like this drummer, wonder who he is?

Hey hey, wait up… the drummer is Anders Johansson out’ve Hammerfall? Well I’ll be a son of a paladin! I had no idea. That is a nice bit of business. Hey, this record has members of Stratovaris and Hammerfall on it? If I’d known that I’d probably have tried it out quicker!

Next up is ‘Fire’ which is very much the kind of song that is the most-commercial song on a Dio album. It REALLY sounds like the 80s due to the keyboard sound… it feels like it’d be in the soundtrack to an 80s movie and by extension sounds hugely like GTA Vice City again. I can imagine competing against the rich preppy kids as a poor but determined underdog in a Ski Tournament in a montage to this song. Side note: A lot of these songs just fade out and don’t have a specific ending.

‘Magic Mirror’ follows. I’m getting more Dio, it’s a mix between the Speed Metal ones and the commercial ones. It doesn’t have the Maiden/Queensryche thing of the other two I mentioned. Its Still pretty Dio sounding though. And yes, after a period there’s a nice fat slice o’ neoclassical. The guitar solo in this one is wonderful, if brief, sort of that Black Label Society paradox where the band famous for guitar would be expected to really have mostly guitar solos but it isn’t the case. Nice song though, catchy, fun, easily digestible but Metallic enough to satisfy that urge as well. Its like a halfway point between Cacophony’s Speed Metal Synmphony and Ozzy’s first four solo albums.

Next up is ‘Dark Ages’ and it’s slower. I don’t know if its going the ‘epic’ route or the doomy route. I think it might be a bit like ‘Egypt (The Chains Are On)’ where it’s the ‘epic’ route without the bells and whistles, and only a regular length. A similar example would be Exodus’ ‘Like Father, Like Son’ which you imagine lasts ten minutes but it really doesn’t… or a modern example would be Trivium’s ‘And Sadness Will Sear.’
Its not an especially memorable song, but towards the end, when the song starts fading out, there’s a really nice guitar part that is pretty entertaining.

The album closes with ‘Trilogy Suite Op 5’ which has an unwieldy title but a nice guitar intro that actually reminds me of the aforementioned Speed Metal Symphony, up until the drums kick in with a sort of shuffle that reminds me more of Saxon’s ‘A Little Bit Of What You Fancy’ and ‘This Town Rocks.’ This song seems to be 7 minutes of solid guitar solos (and instrumental, and much more neoclassical focused) and in that respect is exactly what I expected from the album (I never figured all that Dio stuff would be on it, but lots of guitar solos is exactly what I predicted).

Side note, the drums are excellent, all the fills and little touches with the ride’s bell are right up my street. Oh wait, what’s this… it goes the ‘2112’ route and stops the rock in the middle for some quiet acoustic guitar! Its remarkably well done. At 2.51 it comes back to rock and boy what a fun riff! Nice and bouncy! At this point its not too dissimilar from Michael Schenker Group at times but then there’s also great heavy guitar that’d be happier with Dave Mustaine than Mr. Schenker, but again the keys dampen it so you wouldn’t notice if you weren’t looking.

I really like this last song. Heck, I like the album rather a lot… Its like if the Europe song ‘Ninja’ was a whole album… but that album wasn’t The Final Countdown.

No… I don’t know what I’m talking about anymore… I’m going to bed.